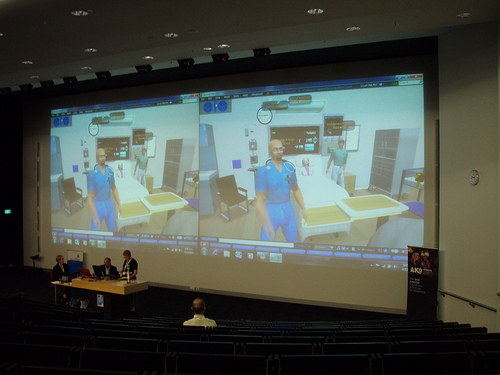 This was a presentation given at the Ascilite conference in 2009, hosted in Auckland, NZ.

Michelle Honey, Scott Diener, Kelley Connor, Max Veltman, and David Bodily began by introducing the ‘virtual’ presenters who were present in Second Life, and then gave an overview of what they were planning to present. It was interesting that while they were using cutting edge virtual world technology, they had the plan on a piece of paper which was placed under a document camera, and which was almost impossible to read! What does this suggest about the use of technologies here…?

Beginning with learning outcomes, the presenters then articulated some of the strategies they applied (such as ethics – the subject was not an exam subject, just in case it was not effective).

Once something is built in Second Life (SL) it is pretty easy to modify and add to it. This particular project was an international, collaborative effort and is an open environment where people are invited to come in, and can ‘take away’ the simulation to install it on another island should they wish to.

It was interesting to bring in presenters through SL although there were issues with feedback to begin with, and obvious relief that the technology was working ☺. The time lag was a little difficult to begin with, but was fine once the presenter got going, although the sound broke up a little bit. It was odd to listen to someone presenting and watch the avatars on the screen, shuffling around, looking ‘awkward’ apparently with nothing to do. It’s almost as if the visual was beside the point, and brought home again how much we rely on visual cues, or meaningful visual input while listening.

There was some discussion about the issues of collaborating internationally, where it is not possible to bump into each other in the hallway for a quick chat. However, they did use the Second Life environment to meet, and get a sense of each other. Several of the developers have not met except through SL.

It was fascinating to hear about some of the limitations, or specific requirements of the environment such as requiring a lot of space in the ‘patient room’ so that the avatars had plenty of space to move around without “jumping all over each other”, and enough room to move the ‘cameras’ around. In the future, they are also going to ask students to set up an avatar with their first name and middle initial rather than pseudonyms to avoid confusion etc..

In NZ there were broadband issues, and it was not easy for students at home even if they had broadband. Scaffolding was provided for students to set up via multimedia. Also, they had a ‘sandpit’ room for students to go an try out the environment so that once they got involved in the simulation it was about the learning, rather than trying to figure out SL.

The highlight of the session was a demonstration of the simulation, although the sound was awful with a lot of feedback, mainly because of the strange set up of ‘presenting’ the simulation. It was strangely compelling to watch the simulation, which was set up as a role play with the new mother, father, and nurse played by the presenters. It was almost as if the drama of the simulation drew us in, although the fact that when, for example, a couple of the physical checks were underway, the avatars do not actually ‘touch’. The debrief at the end (‘attended’ by other members of the ASCILITE conference) was a great way of showing the guided reflection process that learners would experience having been part of the role play. After the debrief, if things need to be reinforced, the students can go through the scenario again.

In the situation with real students, students worked in threes, as it was hoped that there would be some teamwork. Students’ feedback to the simulations resulted in, for example, the development of the sandpit room where they could work out what they could and couldn’t do in the SL environment. The students were overwhelmingly positive about the simulations. Being able to participate from home was seen as a real benefit. Also, students really like the microphone rather than the text chat facility, which they found frustrating, and it also interfered with the feeling of realism – which was vital for the simulation to work. I wonder also if it because learners were having to use dual channel processing (visual input as well as written and spoken words) which interfered with the problem solving capability? Students were really enthusiastic, and often would not want to leave, and would want to stay in SL to discuss things further, and came up with ideas for other simulations.

Another take on this presentation written by the SLENZ team can be accessed by clicking HERE.