I remember at a conference a few years back attending a session by Alan November, who opened with an anecdote about his first trip to Australia, where he met students who were involved in doing meaningful research for the NASA space shuttle - and how motivating it was for the students involved.

Alan started his career by teaching math and oceanography. He was teaching students who were incarcerated on an island. He offered extra help with both subjects, but only had requests about oceanography - especially tides and hypothermia (that being the escape route). Early on his career he realised you could be a great teacher for anyone who is desperate!

It's worth having a dip into a video that Alan shares that shows Harvard graduates being interviewed about the question around where the mass of a tree comes from. The response to getting the answer wrong is as interesting as the answers themselves. The graduates had all studied photosynthesis, but did not know the answer was CO2 - and in fact found the actual answer 'disturbing'.

In the US they have a problem - it is very difficult to apply what you learn in school outside of school. Alan suggests a podcast featuring Eric Mazur, who had received a lot of positive student feedback but was worried that students were passing exams without understanding the underlying concepts. Mazur got an iPod touch - he decided that he was going to immediately test students as soon as he teachers. He asked a simple question and the majority of the students in his class do not get it right. So he had peers work with each other to discuss their responses (based on the idea that people learn in social groups, and that when you actually track students it is the conversations that they have outside of class where the learning actually takes place). Mazur describes how, when people are asked about how they learned the thing they are most passionate about, interestingly, lectures didn't feature, but practice, experience, and family did feature highly. So, what he did was stop all lectures and stopped giving content. He also swapped what was happening in face-to-face sessions, so that what was homework was now classwork, and what was classwork was now homework. If you listen to the podcast you can find out what the results were :)

The most important things about learning is how students process knowledge. It is the processing of knowledge to the point where it becomes synthesised, internalised and then externalised, and personalised. The building of mental models and sharing of ideas around their conceptions is central to effective learning. November believes that there must be much more testing for misconceptions. The knowledge and misconceptions of children therefore become available during the actual learning cycle, and therefore give the teacher immediate feedback about how children are learning. Immediate feedback is central to success. The education system has failure built-in because there is such a delay between making an error and receiving feedback. ICT can help reduce the time-lag for feedback to zero.

What are the most important relationships in learning? Teacher to teacher? Students to students? etc. Learning is social - sitting without engaging with other people is not the best way of learning. Lessons and lectures often just introduce the initial, surface concepts, and it is once the students leave the classroom, where students ask each other for help that learning occurs.

Alan supports tutorials made by students for other students (especially in the form of multimedia) - Alan provides an example of a student-made tutorial about prime factorisation. The last words of the student were "thanks for listening". It took the student 2 hours to design a tutorial like this. The teacher does not a give a grade, he helps with the quality, and everything is voluntary - but this is an option rather than homework (homework would take about 7 mins). When she designs a tutorial to help her friends she feels that it is important, whereas homework, she feels is not important as it was just for her.

Is it, therefore, more effective to have students developing tutorials for other students? This however will require a massive shift in control toward a team approach to learning. It is easy to underestimate children.

Education as a concept needs to change before learning is centralised, and students actually learn in a way that is relevant and that celebrates their input into their community, as well as other communities around the world. For this to happen, we need to figure out...with the young learners: What is the role of children in school? Is it to figure out what the teacher already knows? Or is it to contribute, to create, to help, to play an active, meaningful role? 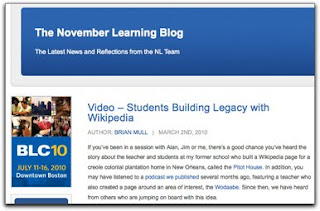